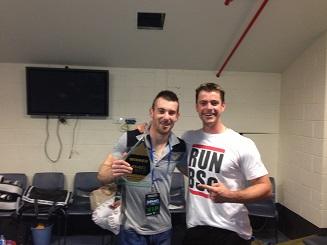 Do you really know what a photo like this means? Do you know what it takes to be a fighter?

12 months ago Anthony was invited to take part in the Australian lightweight brace tournament.

At that point he made a decision to increase his skills in martial arts and see out his goal.

Look you don’t get invited to participate in an Australian title if you don’t have what it takes, needless to say it was going to be tough.

So Anthony created his motto ‘ embrace the grind’ knowing what was ahead of him.

He decided to get stronger, get fitter, look for outside sources of knowledge to help him with his foot work, hands, strength, ground work and everything for mixed martial arts.
Man he did everything and I believe so did we and his entire team at trinity.

The first fight we worked on was countering and he did that.

The second fight we continued with that, changed the game plan to wrestling and won the fight.

I saw in his eyes the internal fight he was having. To throw it away or to keep going? His heart says go but the body asks why?

But last night his heart and head were aligned!

Last night was for the title… the belt!

Something a fighter visualises over and over, again and again and aspires to.

I know, he knows, and our whole team knows, he put everything into that and to see him perform, as a warrior like he did, was what we expected of him (We would not expect any less as that’s what he needs to get to this level). And again he delivered!

Like anything in life these are the skills you need to succeed. To embrace the grind and and see the things out that you start! To go through the broken toes, bad nights sleep, feelings of giving up and just keep moving forward.
It’s true what slyves says in rocky 6
‘life is about how much you can take and keep moving forward…. That’s how winning is done’

This is what most don’t understand…

This is what this sport teaches you and

I believe this is the biggest belt a martial artists earns.

This is what you have earned Anthony!

It’s yours to wear and apply in all areas of life and when times are tough you get it out.

You can share with others with honour and pride.

Be proud of your belt mate. Osu